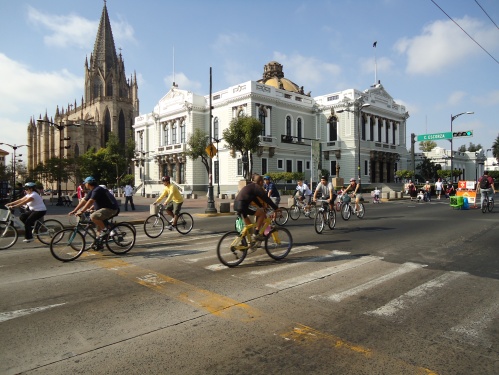 Via Recreativa in front of the University of Guadalajara ©Ryan H.

Guadalajara is a city devoted to public spaces, parks, and plazas. Any given day or night these spaces are filled with families, vendors, and musicians. It is little surprise then, that Guadalajara hosts one of the most successful Car Free Sunday events the world over. This event, called Via Recreactiva, was inspired in a similar fashion as many other innovations in Guadalajara, by citizen activists.

We tracked down the Director of Via Recreactiva in Guadalajara, Oscar Rodriguez Aleman. He told us the origins and history of how Guadalajara had created this weekly space for community and health.

The citizen activists of Guadalajara were studying how to compose better public spaces and urban vitality. They met with the former mayor of Bogota, Enrique Peñalosa and were inspired by the example of this city in Colombia. Since 1976, Bogota has opened streets to cars by removing vehicular traffic, every Sunday. Approximately 2 million inhabitants of Bogota regularly enjoy these car free spaces to play, recreate, exercise, and socialize.

The citizen activists of Guadalajara teamed up with municipal “bureaucractivists” to try out the idea of a weekly car free space. This idea had not been successfully employed in Mexico before. Some of the government officials were very excited to put a car free plan into action, reacting that “let’s start tomorrow!” Instead, the city studied the idea for 6 months before hosting Guadalajara’s first Via Recreactiva on September 12, 2004. 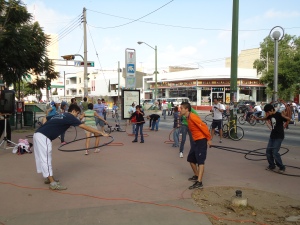 Hula Hooping in the Park at ViaRecreActiva ©Ryan H.

Originally, the car free space was planned as an experiment to occur weekly for 12 Sundays for 4 hours each week.. The route was on downtown Guadalajara’s main east-west arterial, Avenidas Vallarta and Juarez that stretch from the Park of Solidarity to the Gates of Minerva. According to Sr. Oscar “We did the event downtown because there was such car density. Not only is this route beautiful, but it is the most important and traveled car route throughout the city. We wanted to empower people to enjoy our city.”

Quickly, the experiment proved to be a great success. The only drawback was that too many people were attending, so Guadalajara had to rapidly expand the route!

Via Recreativa now regularly attracts 150,000 participants weekly. It stretches over 25 km through Guadalajara alone and is accomplished weekly with around 400 volunteers, 150 support staff, and support groups like police, fire marshalls, and permit inspectors. These support groups are not paid overtime for their participation. “Because the role of these groups is to keep our city safe, the Police and Fire Departments factor Via Recreativa into their budgets.”

In 2008 and 2009 the surrounding suburbs started their own Via Recreativa events. These car free spaces occurred because of citizen demand. Now the Guadalajara route connects to these neighboring suburbs of Tonala, Zapopan, & Tlaquepaque. Together these Via Recreativs compose an extensive route stretching throughout the metropolitan region from the center of the city to residential suburbs. Another distant sprawling suburb, Tlajmulco, also has a weekly Via Recreativa in an area of the Guadalajara metropolitan region that resembles much of suburban United States, with big box stores like Home Depot and Walmart dominating the horizon. 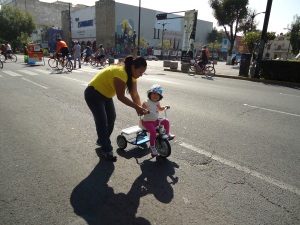 Little Nina learning to ride her trike during Via Recreativa, on what is ususally one of the busiest streets in the city. ©Ryan H.

Having experienced the summertime monthly car free “Sunday Parkways” in Portland, Oregon, we were delighted to see a larger and more mature event. The first thing that I noticed was that the streets were not just filled with bicyclists, but also with walkers, rollerbladers, youthful skateboarders, and the disabled. Children were learning to ride their first tricycles and bikes on the route. Teenagers and young adults giggled, while learning to rollerblade. Longboard skateboards carved these downtown streets.

The City of Guadalajara tries to encourage a diverse event by conducting outreach to these groups. A designated skateboard zone is set aside for attempting tricks. Volunteers are brought from local schools and the public university to help direct traffic and answer questions. The City publishes a comic book on how to safely enjoy the Via Recreativa. A local band sings the praises of the Car Free event with an album, “Ven a la Via” (Come to the Via), with liner notes explaining their passion for the event. “For everyone who likes walking, jogging, bike riding, skating, family stroll, using a wheelchair, enjoy recreational activities, cultural events, getting to know the city, or simply seeing and enjoying peoples movement through the city. Live Guadalajara, you are it’s soul . . . Come to the Via” 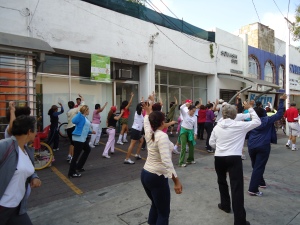 A Fitness Club leads dances n their parking lot during the Via Recreativa ©Ryan H.

As the route progressed through downtown, engaging events were on every block. Volunteers were teaching hula hooping in the park and others were playing “Twister” on the sidewalk. Businesses spilled into their parking areas and led dance classes or held sidewalk sales. Mobile bike mechanics pedaled the route. The city invited bike store owners and mechanics to set up shop on the sidewalk, repairing and offering advice on how to best tune up one’s bike or skateboard, earning tips in the process. The local newspaper, El Informador offered over 2000 free bikes emblazoned with their logo to anyone who brought a coupon from the morning paper. Tours were led often of Guadalajara’s many historic sites along the route by city staff and volunteers. Free bikes with ‘LaLa Milk’ advertising were available for these tours. Restaurants offered breakfast and brunch specials and bars advertised drink deals. A bridal shop on the route, unlike most others in town, was open on a Sunday and had a huge sign proclaiming that fact, “ABIERTO DOMINGOS.” A children’s scooter race course was set up in a new plaza in the middle of Avenida Chapultepec. Underneath the Gates of Minerva, skateboarders jumped and pulled tricks. Every where we looked families, youngsters, disabled, and the elderly were enjoying this people friendly space running through the center of the city. 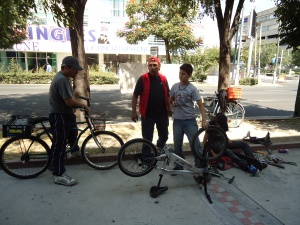 We were only able to explore a fraction of the route that now stretches from Tonala to Tlaquepaque, then into Guadalajara, and off to Zapopan.  The incredible length of this combined route allows all inhabitants of the Guadalajara metropolitan region a chance to recreate in their neighborhood and beyond. We only experienced a small part of this delightful Via Recreativa, but were amazed at the approachability and humanity of Mexico’s 2nd largest city. This people friendly space welcomed us to beautiful Guadalajara, a city shaped by the visions and dreams of her citizens.