We arrived to Mazatlan at eleven at night (5 hours later than we were promised and sold). It was dark and late.
There was a lot of partying on the streets surrounding the bus terminal which made us frightened. After hearing so many horror stories, the last thing we wanted was to be on a foreign place with no plans, no friends and huge backpacks.
We frantically walked around the blocks near the bus depot, shopping around and we found an affordable hotel room that supposedly air-conditioned and had WiFi.  We paid one nights fee and followed the man to our humble abode.  He gave as the key with a great big smile and a “Buenas Noches.” We were overjoyed saying: “WE MADE IT” with our traditional

celebratory high-five, immediately followed by  “is that a roach walking on our pillow?”Fortunately, it was not ONE roach, but actually TWO gigantic roaches taking a stroll on the white linen. Alas, it was by now much too late, we had already paid, and we had nowhere else to go. So we laid down a blue plastic tarp on the bed and opened our sleeping bags where we slept pillow-less on the tarp.
Next morning we gathered our belongings, thanked the man and

investigated town. Mazatlan is a beautiful city full of life with a beautiful historic district and tons of these crazy Golf Cart taxis, called “Pulmonias” buzzing around.  One of our biggest surprises with Mexico was all the suburban sprawl! Big box stores fringed the historic city.

We explored town, walking the waterfront and taking in all the foreign sights.  We had never seen preschool walls guarded by broken glass embedded in concrete along the top.
We wandered the colonial streets and found a Paleteria!  Back in Portland, we run an Ice Cream Tricycle business vending fruit popsicles made from Paleteria Paisanito in Woodburn, Oregon.  The owner of Paisanito makes the most delicious treats and even custom flavors for us.  We were so excited to find a Paleteria here in Mazatlan and even more excited that they were trying new popsicle making techniques, like not using corn syrup and trying natural coloring.  The owner was a bit bewildered to meet Tricycle Paleta Vendors from Gringolandia, but she happily toured us around her cute shop.  We left with big smiles and devoured her fruit treats in the Mexican sun. 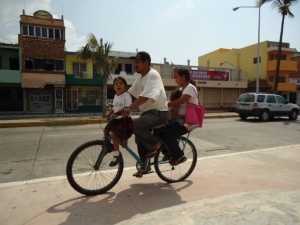 The old town is gorgeous and we explored it’s narrow alleys.  As the day wore on, we began to think about the night.  Not wanting to sleep with our cockroach friends again, we logged online at a web cafe on the main plaza and checked into Couchsurfing.com.  We had used CouchSurfing once on our trip South in the States and had a great night with an old professor on the Oregon Coast.  We had received some offers in Mazatlan, but did not want to call our hosts that late at night.  It is always a bit nerve wracking to make the CS call, our plans always are upended, usually in a great way.

We called our potential host.  It was late in the afternoon and Miguel was just waking up, he scolded us for not calling him the night before.  Miguel knew the cafe that we were at and he sent his favorite taxi driver to pick us up!  His address was in Zona Dorada or the Gold Zone.  The taxi showed up promptly and wove in and out of traffic to get us from the historic center to Miguel’s abode.  The streets were hectic and busy as we drove through the neighborhoods.  Street performers dressed as ancient Aztec warriors danced in the intersections for spare change.
The Gold Zone lived up to its name and the businesses turned dramatically glossier and more corporate as we approached the entrance to Miguel’s gated community.  Lale and i spoke to each other nervously in English, trying to figure out whether we had gotten ourselves into trouble here.  Were we heading to the palace of a Narco?
Miguel lived in this palatial housing complex surrounding a golf course and many swimming pools.  We were not sure what to expect.
He came out of his beautiful condo and welcomed with perfectly American accented English.  Miguel toured us through his place and showed us our room with a private bathroom, Egyptian cotton sheets, and our own personal towels!
We settled into conversation and slowly discovered that Miguel was just a dorky fellow who worked for a Canadian mining company.  The luxurious setting of his housing community was mostly a haven for American Gringo retirees and for rich Mexicans.

For the next two days, we enjoyed this royal CouchSurfing lifestyle.  Miguel insisted on going out on the town and we had dinner in the middle of the Historic Center.  Afterwards, he slick talked us into the municipal theater and we watched an incredible choir and concert.  It was quite a remarkable difference from our Cockroach motel!