Utility Cycling on the Oregon Coast

Utility Cycling on the Oregon Coast, a photo by Global Greenways on Flickr.

Part of the series: “45°N to 41°S Portland, OR to Puerto Varas, Chile by Public Transit”

This fellow was the only cargo cyclist we saw on the Pacific Coast until San Francisco.

He was working on his vehicle and had pedaled to the gas station for a quick fill.

Always a bit of a surprise to leave the Portland bubble and realize the rest of the country is still driving and paying their incomes to oil companies!

Making the Transfer in Pacific County

Part of the series: “45°N to 41°S Portland, OR to Puerto Varas, Chile by Public Transit”
Little known to daily commuting bus riders in the Pacific Northwest, a web of interconnected bus transfers one to ride the public bus from Lund, British Columbia to Eureka, California with little interruption!
We started our travels in Sammamish, WA and rode King County Metro to Sound Transit.  Our goal was to make it to the Washington coast by sundown and eventually to Chile by public transit!  But first, we had to escape suburbia by bus!  This was one of the most expensive segments on our trip because the transfer policies of Metro and Sound Transit forced us to keep buying a ticket for every bus ride, no matter how short.  After paying 6 different fares to Sound Transit and Metro to travel from Sammamish to Lakewood, we realized a taxi might have been cheaper.  We were joking that it is easier and more economical to drive in Seattle, until we realized that it was not a joke.
The buses, scenery, and passengers became increasingly rural as we rode through Olympia, and Montesano, headed to the coast.  We spent the night with Cousin Zach and Mary, who hosted us for a great evening! 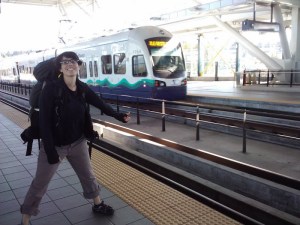 The transfers between agencies are great, but not very well thought out.  The state of Washington and Oregon would be wise to invest in these existing transfers and encouraging neighboring transit agencies to coordinate their schedules.  Right now, the state of Washington funds a Greyhound style service that duplicates these rural bus transfer routes. Several times one long distance bus would arrive minutes after the continuing bus had left,  stranding folks to call friends and family.  We would try to leapfrog some of the transfer gaps by hitchhiking at the bus stops and get ahead of the next bus.  These rural bus networks are such a valuable resource, depended on by many people.  The ability to ride buses from Vancouver, BC to California should be celebrated and promoted. Unfortunately, this great network is stymied by lack of schedule coordination between agencies.

We rode 101 South, watching the coast from our bus seats.  Some of the rural bus drivers like to play classic rock on their routes and we would not rock out with them in our seats!   We rode each bus to the county line and would transfer to the next county’s bus service. After 4 days of leisurely travel on buses and hitchchiking, we had made it to Crescent City just in time for their biggest party of the year.  It was the Crecent City Motor Truck Rally Weekend!  The entire town was filled with big trucks speeding around downtown, squealing tires and burning rubber!

Riding in the Back of a Pickup Truck!

Part of the series: “45°N to 41°S Portland, OR to Puerto Varas, Chile by Public Transit”

Last year, we ventured from Portland, Oregon to Puerto Montt by Public Transit! We had to make it to the South of Chile for Mom’s Christmas Barbecue! All throughout Latin America, we stopped at weekly Sunday Parkways and talked with bike businesses as we rode various transit South.  We found some great mobility ideas and innovations in unexpected places!

Global Greenways shares our stories of cycling culture, bike fun, Sunday Parkways, Bicitaxi/Pedicab drivers, Roller Derby, transit, and of bike businesses in the Americas.  The route of our 2010 investigations took us down the Pacific Coast to the South of Chile.

We will blog the experiences and lessons we learned from Latin American cycling and active transport activists. They showed us that Latin American social movements for urban mobility and public spaces have as many lessons for urban design as traditional beacons of sustainability such as Copenhagen or Portland!

In many of the Latin American countries visited, very innovative practices were being implemented.  We saw experimental Cycletracks on downtown Mexico City streets, Bus Rapid Transit systems in Quito, Huge Sunday Parkways in Guadalajara, and Aerial Trams as mass transit in Medellin.  These were some of the unique mobility ideas that we experienced en route.

Our travels this year will begin in Colombia with Sunday Parkways and Roller Derby.

We are getting everything wrapped up in Portland and ready to head South again.  This year, we are starting in Colombia and hope to visit the birthplace of Sunday Parkways.  Just like last year, when we traveled from Portland to Puerto Montt, Chile by public transit, we will share news and ideas from the bike lanes of Latin America!

Our plans are a bit ambiguous, but tentatively, we would like to head down to Chile via the Atlantic coast and research biking and transit in Brazil and Argentina.

We are starting in Colombia because it is a country with such an innovative approach to transit and cycling networks.  We can’t wait to learn more!

Hello! Global Greenways is an organization devoted to investigating and sharing knowledge about the different Social Movements in the Americas for new Urban Mobility and Public Spaces.

Please follow us our blog and contribute to the conversations about mobility in the Americas!